Manspreading: What The Heck Is That!

Manspreading: What The Heck Is That! 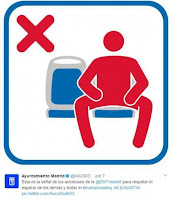 Goodness me! Manspreading is a term given to conscious and unconscious display of selfishness by men mostly on public transport.

…women are not left out too!

The world over, people have been crying inwardly to God to come save them from the torment of the hardened practitioners of this intimidating antisocial behaviour in public spaces.
Just the other day, I boarded a public transport and sat beside a fellow man who was on the three-seater seat before me. He adjusted for me and the next thing I observed was how his two legs encroached into my space. Not only that, he man-spread his arms on the backrest of the seat opposite us. Come and see how the putrid smell of his armpits hit my nostrils and stopped dear oxygen from getting through my oxygen pipes. Jesus Lord! I felt intimidated by the fact that this guy doesn’t look “exposed” and might take offense should I ask him to adjust once again and beat it to his own space. You can see that’s how they make other passengers suffer on services they never asked for.
I eventually summoned courage and asked him to do me the favour of manspreading less, though without putting it that way. He hissed before he adjusted, but I observed he was still hell-bent on manspreading, because part of his slim body and leg were still within my own space, so I let it slide.
This experience is what people face the world over and have started kicking against it. People have fought with fellow passengers over this matter as some passengers in public transport don’t find it funny having any man emasculating them any further especially the feminists in Nigeria. People have wasted their strength exchanging hot verbal missiles with one another who as strangers never wanted to do so in the first place, but for the psychological torture and intimidation this manspreading bears on them.
You’ll see people suffocating as a result of your manspreading, yet, you’ll pretend like it doesn’t matter. It is your exhibition of gutter sense of self. The fact that you are a man and needs to have extra air caress your clothed privates is not enough to have the world suffocated simply because you are that hot there.
Learn to be conscious of how you spread your legs in public spaces. Besides, it doesn’t look sexy if actually you are sending out some signals to the lady beside you. Know it today that it hurts your fellow passengers when you man-spread.
Manspreading is absurd and ancient and beautiful-emotions killer. You know what I’m saying?! Yes! Stop it! It sucks being selfish!
Tags:
Previous Article
Child Upbringing – How To Teach Your Children To Be More Socially Responsible
Next Article
Potential Means Nothing – Know What Potential Really Is

Potential Means Nothing – Know What Potential Really Is
admin Jun 19