Environment: Gully Erosion Menace – Do Something Please! Who?

Environment: Gully Erosion Menace – Do Something Please! Who? 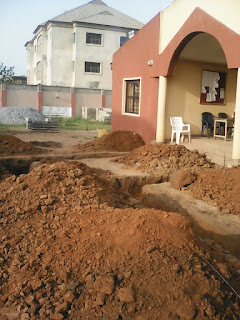 In our last edition, we discussed the effects of the rampaging and ravaging flooding that suddenly engulfed our environment and sent many homeless thereby rendering them internally-displacedin their own fatherland. Many lives were lost to the flood even as some were lost to dangerous reptiles that had their natural habitats destroyed by their mightier up-above and under-the-land sister – water/rain – who is enjoying her season. No one blames her at all. Those living in Lagos are daily witnesses to the impact of natural disasters brought about by the perennial rainfall and the surging oceans. When Kuramo Beach was visited by the tornado, Kuramo was no more but not before going with some Nigerian lives.
The government agency in-charge of sending us warning signals of impending natural disasters; Nigeria Meteorological Services came out to say boldly this time around that they sent warning signals and not only that alone, but wrote the affected states prior to the natural disaster. From Bayelsa to Anambra through Kano to Edo, the stories remained the same. This time around, our governors wouldn’t come up with any excuses other than the usual one of not having the financial capability to handle the impending disaster and the disaster itself. Our poor attitude to proper handling of our environment has done us in again. Who do you blame now! By the time the Federal government came out with palliative measures and relief materials, rooftops had gone missing and human beings were exposed to nature at its worst impact. But nevertheless, the present government would be pelted with nothing but accolades and praises for setting up a body co-chaired by Africa’s richest man Aliko Dangote and foremost human rights lawyer Olisa Agbakoba to raise funds for further help to affected states who were categorized from category A to D. Oops! The former administration of Goodluck Jonathan did us such favour. Wonder what became of such a Body?
Relief finally came!
Or did it? When the rains packed up and the floods dried up into their comfort zones, the impact is now more pronounced. A state like Anambra state just like most South East region and South South region States now has another clear and ever-present threat eating up the little land mass left them by God. Erosion! Who is to the rescue? There are many century-old erosion sites that this young state like Anambra has been grappling with in the last twelve years; some have been brought to successful termination while others would need the help of the Federal Government to curtail the impact of this menace that has defied measures so far taken to put a stop to its numbing threats. Many houses, household effects and lives have been lost to the menace of erosion aside farmlands that have cost the affected Nigerian states their agricultural products and means of livelihood.
Now who is coming to the rescue? Me? I’m only but a writer who will contribute to moving Nigeria forward by writing about this using this platform to do what is expected of every patriotic journalist/Nigerian. And what about the affected states? Let them use their executives’ security vote(s) to see to it. Does that mean security is not important anymore? In this season of kidnapping and armed robbery and Boko Haram? It is only that there is so much hunger in the land. That is why tempers rise and boil-over over minor disagreements. That was why Mubi killingsand the waste to lives visited upon Aluu Four happened in our lifetime.
But does that mean there is no place in tackling the ugly menace and mental torture caused victims of erosion in this country by the might of the Federal Government? In that case, let us believe it is part of the 2017 budget proposal the President has graciously brought early to the floor of the National Assembly – a first-time in the history of this great but troubled nation – so that the hue and cry of the victim-states which to those who do not suffer this fate is not true will be brought to an end. Bulk-passing is a Nigerian factor thing too.
The Federal Government will have to work-out a workable tripartite formula that involves the three-tiers of government, that is, if we have the poor dear third-tier of government in existence still. Now we know we all have to come to the rescue of the erosion-threatened states by having all hands on deck and not playing our favourite card of ethnicity on this. It has never helped us. Let’s get started please!
Tags:
Previous Article
Swimming: Nature Way Versus Man-made – Which Is More Fun? {Interview}
Next Article
Living in Fool’s Paradise: What Was I Thinking Getting Married to My Secretary?

Only In Nigeria
admin Jan 23

What Mama-Put Means To Nigerians

How To Handle Critics And Their Stock In Trade

Living in Fool’s Paradise: What Was I Thinking Getting Married to My Secretary?
admin Jul 22