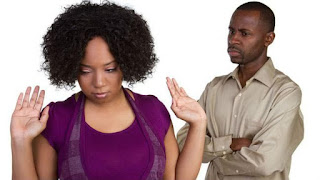 The verdict is out. I spoke to some men who I’ll not reveal their names here who are culpable in this line of keeping their wives away from public and virtually keeping them under house arrest. Their answers to some extent are funny and almost childish, but anyway, the job of an interviewer is to find out those factors responsible for such marital hiccup and bring them to the knowledge of his readers.
My first respondent gave me the shock of my life when he answers thus:
“My brother, I will not lie to you. Good a thing, you are also in this marital business. I fought seriously before my wife accepted my marriage proposal. It was a serious battle between me and two other guys who have tasted her forbidden fruit and enjoyed her sexual experience in bed. I must tell you that she is good in bed. Why I stopped her from going out per say, is because we ran into one of those guys in a social function and the way they greeted each other unnerved me. My anger and jealousy that this guy could still be ‘servicing’ my wife at my back made me pick a fight with her and dropped the bomb that she will no longer go to anywhere except where I take her to. Even church too, because I don’t trust any man near my beautiful wife.”
My second interviewee bluntly aired his wife’s dirtiest laundry. This is how he put it:
“My wife is a cantankerous woman. I don’t know why she hates to see any woman near me. Even when we were dating, she almost broke my sister’s head the day she met her in my house when she concluded that my sister could be one of her contenders for my love. She is a good wife and mother to my children, but whenever and wherever she runs into me with any other woman, this uncontrollable anger will envelop her and her next action always leaves me more embarrassed than the word could do enough justice to. That is why we agreed that she be not going out except with me by her side. She always says that I’m too handsome to be trusted around another woman.”
It took the urging-on of three of us as we were four round the table in this nice bar at Nnewi during the last festive season to make my third respondent to give me his reason for having his wife ‘caged’ and her wings ‘clipped’.
“I caged her the day I caught her coming out of a hotel I would’ve sworn she doesn’t know is existing with her teen-days lover. She told me he is the one that deflowered her and she still loves him so much. Unfortunately for her, her parents needed her to marry a man of means like me as the young man was still struggling with his university education. To cut the long story short, we handled this matter between the two of us without involving a third-party. She accepted my proposal that the only place she would go unsupervised is our children’s school, and that is to drop them off and pick them back home. I know she hates me for my extreme measure, but I wouldn’t want to commit murder if I catch her with that guy ever again.”
Good lord! As for me, my wife is as free as a bird because she has not given me any reasons to doubt her loyalty and faithfulness.
Women, over to you! We all know that every dog munches faeces, but only the one that is caught eating human waste is guilty of being adulterous. But of course, not every woman does that ‘shit’ called adultery, and same goes for the men.
Tags:
Previous Article
Only In Nigeria: The Mosquito-treated Nets Given You Don’t Kill Mosquitoes
Next Article
Why Divorce Rate Is High In Nigeria Today – Read How to Keep Your Marriage Intact