Telling Someone To “Weep No More” Is Comfortless

Telling Someone To “Weep No More” Is Comfortless

Many a times we want to delude ourselves into believing that we can circumvent God’s input in our lives through his son’s teaching while he was here on earth to help carry the burden of our sinful living and make them of no consequence on us, but at the end of the day, we succeed in cheating ourselves. Who’s the loser now!
Weep no more as joy comes in the morning is a cool phrase to use on someone who is undergoing the pains of life challenges. On the other hand, it leaves one comfortless. Yes, the word of God is there to help ease off these life pains thrown at us by challenges, but going practical with this exhibition and expression of love by demonstrating to this person in need is all that is needed to make life worth living to this person undergoing such unexplainable pain.
Take you cue from the story of this young man who in the course of preparation for his wedding ended up spending all that he had and borrowed to give his wedding that once-in-a-lifetime touch. Life lost its meaning when he couldn’t provide for his family with food and what was supposed to bring joy to him became a source of both mental and physical pain. He prayed hard alongside his dotting wife who was then without means of livelihood and God sent him his boss whom he served in his days as an apprentice. When his boss asked him how his preparations were coming up, he shook his head and torrential tears flowed freely from his eyes. This young man was still being emotional when he felt a touch on his hand and behold, his boss had given him a cheque of five hundred thousand naira.
His tears dried up immediately. He became comforted.
You can imagine his joy as the money was enough to offset his debt.
That’s it! It’s better to touch life where it itch the most. Be like this boss and start leaving a legion of comforted people in your trail and God will not leave you comfortless when it gets to your turn.
Bible Reading: Luke 7: 11-15; John 11: 1-45
Tags:
Previous Article
What A Madman Said At A Rich Man’s Burial
Next Article
The True Meaning Of Slay King And Queen

The True Meaning Of Slay King And Queen
admin May 24 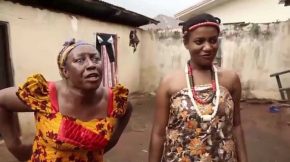